I Survived the Apocalypse and Holiday Hours 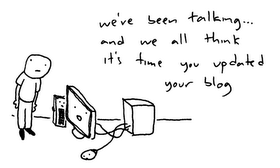 Hello Internet and SoACTing fans (which I'm sure at this point probably consists of two people, includng my Dear Lover)! But I digress...

I've survived the Mayan Apocalypse and braved the holiday hours. I'm still recovering from working the grueling hours of 4:30pm to 9:45am Monday through Saturday, which, now that I think about it, was probably easier then the prophesied polar shift, biological disaster, nuclear war, or zombie virus attack. And here I sit.....typing.....alive, as far as I can tell. Cheers to another year and the beginning of another trip 'round the sun on this ever-spinning blue marble of gas.

While I haven't been able to post, I haven't been doing nothing (double negative = I have been doing something), either. In fact, a few notable subjects have been plaguing my mind that I've been furiously writing blog posts about without being able to put some finishing touches on.

I can't wait to get back to a blogging routine and I'm looking forward to posting about:

And as I hinted in my last post, I'll be continuing my series on My Conversion and My Fall From Grace.

Until then, see you in the Blogosphere!